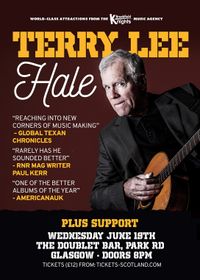 One of the most powerful singer-songwriters the world has ever produced, Terry Lee Hale has been making great records for twenty five years.

He first made an impact on the Seattle scene, playing the clubs and bars with his open guitar tunings and dark, dangerous songs, and went on to build a faithful fan base that’s spread around the planet.

In 2013, he delivered The Long Draw on Glitterhouse Records, and Bound, Chained, Fettered appeared in 2016, built from truthful stories sung with a voice that reflects and carries the emotional weight of time, obstacles overcome and wisdom earned.

Those who have seen the man in action will tell you that this is as good as it gets.